Life at the Top in Summerlin 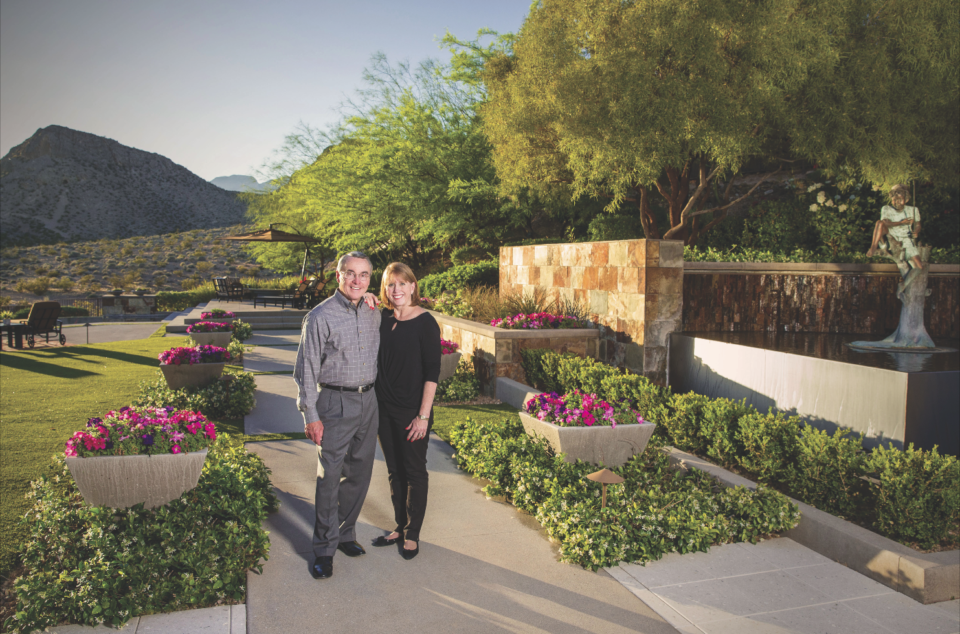 If legacy is a hallmark of a life well lived, long-time Summerlin resident Don Snyder is the standard in Southern Nevada. Snyder’s influence on the community and uplift on quality of life in Las Vegas is nothing short of vast and remarkable given that his endeavors have enhanced the arts, higher education, tourism, gaming and even the city’s hottest and most current focus – professional sports.

This former banker turned gaming executive lives in a stunning contemporary home in Summerlin with wife, Dee, also a community betterment contributor and doer.  The couple has long found sanctuary from their busy lives in The Ridges at Summerlin, the master-planned community’s luxurious village situated along an elevated ridge on the Las Vegas valley’s western edge. With its indoor/outdoor feel and unparalleled backyard view, the Snyder home is ideal for entertaining and has been a popular party, gathering and fundraiser spot in recent years.

Don launched his professional career in banking, ultimately serving as Chairman of the Board & CEO of First Interstate Bank of Nevada from 1987 to 1991 before co-founding Bank of Nevada that grew into a multi-billion-dollar, multi-state banking organization under parent holding company, Western Alliance Bancorporation.

Don’s move to the gaming industry in 1992 coincided with his efforts to develop Fremont Street Experience, now a colossal downtown Las Vegas attraction that draws more than 22 million tourists annually to the heart of the city where gaming got its start. On the heels of Fremont Street Experience’s highly successful opening, Don joined Boyd Gaming’s board of directors and quickly ascended to company president, a role he held until his retirement in 2005.

Not content to rest on his laurels and trade in his briefcase for golf clubs, Don got to work building something Las Vegas had long lacked – a world-class performing arts center. Today, The Smith Center for the Performing Arts hosts hundreds of shows annually – from Broadway touring productions to concerts, ballets, theatre productions and more. For The Smith Center, Don raised hundreds of millions of dollars and brought public and private partners together to establish a true center of culture in Las Vegas, a stunning accomplishment given the city’s long-standing reputation as a cultural desert.  Today, Don still serves as Chairman of the Board of The Smith Center, a transformative project that will forever be associated with his name. 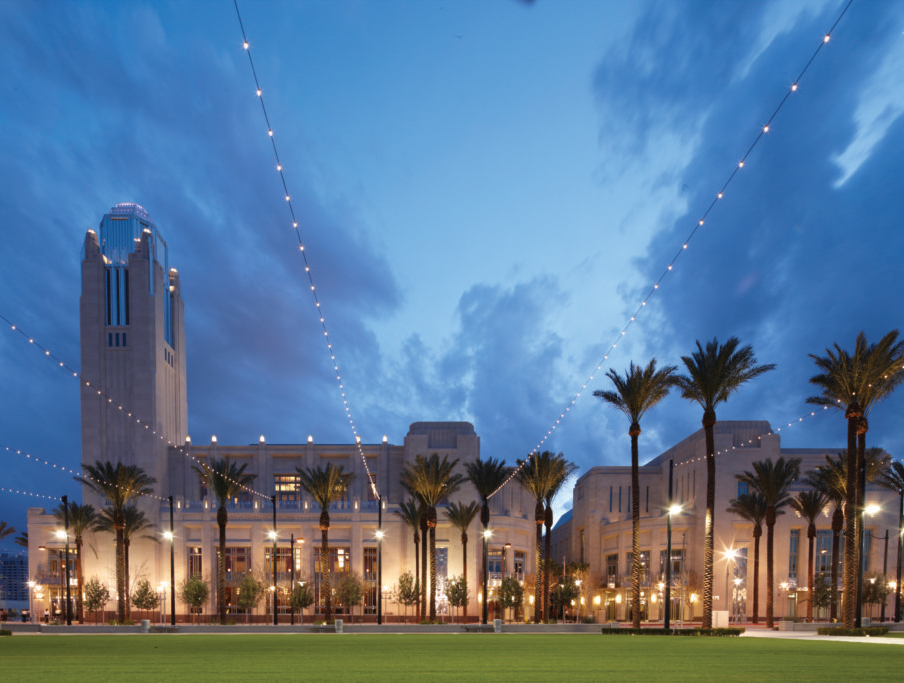 Higher education is yet another passion of Don’s. He is the immediate past President of the University of Nevada Las Vegas (UNLV), and today, still serves as Presidential Advisor for Strategic Initiatives in the Office of the President. In this capacity, he recently played a leadership role in discussions with Oakland Raiders’ owner Mark Davis about building an NFL quality football stadium in Las Vegas, particularly as it related to the UNLV football program and other ancillary uses.

In fact, Don, who seemingly has a role in nearly every major initiative in Las Vegas, is ecstatic about the arrival of the National Hockey League’s Vegas Golden Knights, which is building its state-of-the-art practice facility in Summerlin. “The Vegas Golden Knights helped to pave the way for other professional sports franchises to seriously consider a move to Las Vegas,” Don said. “And now with the arrival of the Raiders, our city literally grew up overnight. This is an exciting time and signals a new era for Las Vegas.”

Involved with UNLV for more than 25 years in a variety of professional and volunteer capacities, Don also served as Dean of the William F. Harrah College of Hotel Administration and is today focused on strengthening UNLV’s role as the intellectual capital of global gaming, which is tied directly to the state’s economic development plan.

A prolific fundraiser, Don is a former Chairman of the UNLV Foundation and Co-chair of the university’s successful $537 million Invent the Future capital campaign.  In his “spare time,” he has served on the boards of more than 15 public and private companies, numerous nonprofits and several legislative commissions.

Two of the couple’s grown children, David and Christy, along with their three adorable grand-children, Chase, Callan and Zaine, live outside Nevada. So the Snyder Summerlin home is frequently abuzz with visiting family and friends. The couple’s son, Matt, a professional golfer, lives nearby in Summerlin’s Paseos village with his fiancée, Jamie. The young Snyder couple will tie the knot at The Smith Center later this summer.  Full-time residents of the Snyder household include two rambunctious rescues – Gordie and Keywee, to whom Don and Dee are dedicated dog parents.

Dee, a former long-term board member of Discovery Children’s Museum, worked tirelessly alongside Don behind the scenes to help relocate the Museum to its new home at Symphony Park adjacent The Smith Center.

Dee, who was drawn to Summerlin years ago, said of the community, “there is no better place to live in Las Vegas. Summerlin’s many parks, trails and golf courses make this an especially beautiful place and I love seeing residents out and about enjoying themselves and taking advantage of everything the community offers. And on a rare night when we don’t have a social obligation, we escape to nearby Downtown Summerlin with a plethora of dining options to enjoy a quiet and delicious evening out just minutes from home.” 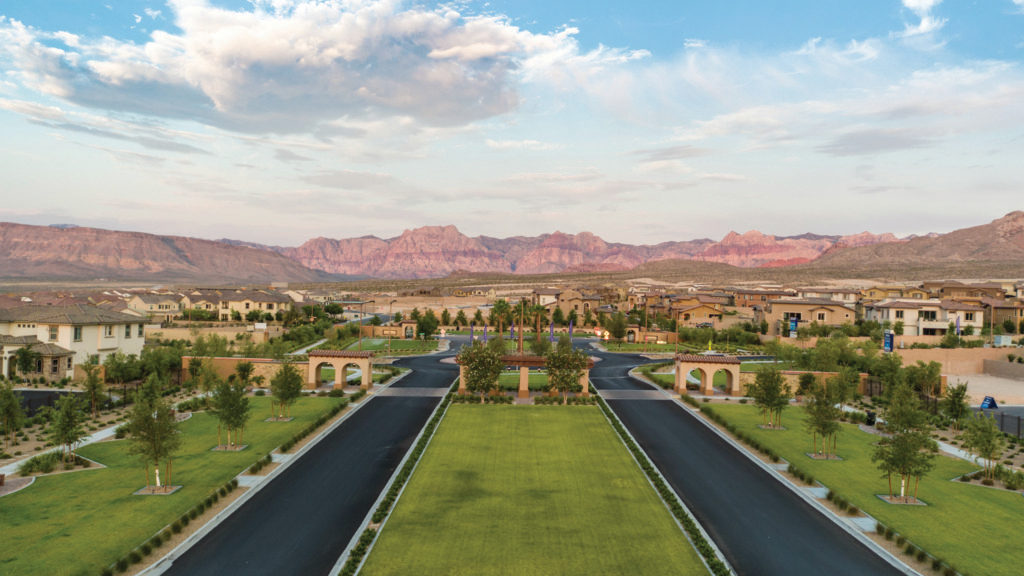 In Summerlin, the Snyder’s spectacular backyard literally abuts Red Rock National Conservation Area, Southern Nevada’s most treasured natural landmark that affords spectacular views of the valley to the east, and to the west, untouched nature.  It creates a sense of serenity and peace amidst the city’s bustling energy. And in The Ridges, the Snyders are among friends and neighbors who include many of the city’s professionals, captains of industry, entrepreneurs, executives and community influencers.

“We purposefully selected this lot given that we knew nothing would ever be built behind us,” said Don. A small cave on the hillside, visible from the backyard, is a Snyder family landmark where Don and now grown son, David, rode their dirt bikes years before there was a Summerlin.

While The Ridges has long been considered the Las Vegas valley’s pinnacle of luxury living, The Summit, a joint venture of The Howard Hughes Corporation and Discovery Land Company, is now taking shape just a few miles from The Ridges and offers yet another Summerlin opportunity for those desiring the city’s most exclusive address and ultimate resort-style community. In fact, the Snyders have already purchased a lot in The Summit with a summer 2017 groundbreaking planned for their next Summerlin home.

“Las Vegas has been very good to us, and Summerlin has been our home of choice for decades,” said Don. “We love the daily buzz of the city, yet we adore the quiet and beauty of our private life in The Ridges. Most of all, we love being part of a community that is also home to so many of our friends, peers and associates who share our passion for Las Vegas. We are excited to build our second dream home in The Summit, and we can’t wait to see what other adventures and opportunities await us.”