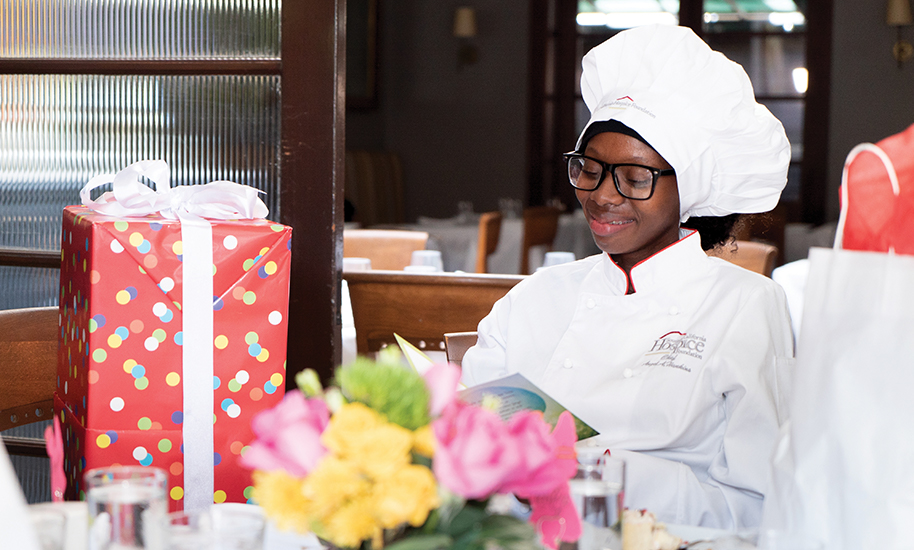 The teenage years are when one begins transitioning general interests into goals and then transforming them into career paths that govern the future and often last a lifetime.

Such was the case for 18-year old Angel Hankins, whose interest in foods and cooking had her enrolled as a culinary student at the Los Angeles Trade Technical College. In short order, she also received a devastating diagnosis – of stage 4 metastatic carcinoma, a very aggressive form of cancer – that would dramatically alter her dreams and severely impact her future.

Earlier this year, Angel stopped seeking chemotherapy treatment and, in turn, became a patient under the care and guidance of Companion Hospice in West Los Angeles – a program focused on emphasizing quality of life for those diagnosed with life-limiting illnesses. Angel and her care givers began to reassess future dreams that now must be condensed into immediate days and months rather than spanning years and decades.

Angel’s interest in foods and cooking came to the forefront and her care givers reached out to a hospice assistance organization called the Southern California Hospice Foundation (SCHF) in Costa Mesa. It provides additional support through five essential programs that work to assist Hospices, one of which is fittingly-named the “Angel Assistance Program” that solely focuses on fulfilling a patient’s life dream or to make a particular wish a reality.

“We receive a wide variety of requests,” notes Michelle Wulfestieg, Executive Director of SCHF, “and they are usually something like a trip to Disneyland or along those lines… but, Angel’s request was to be a Chef and to cook a lavish meal for others… and she had some specific recipients in mind… foster girls.” 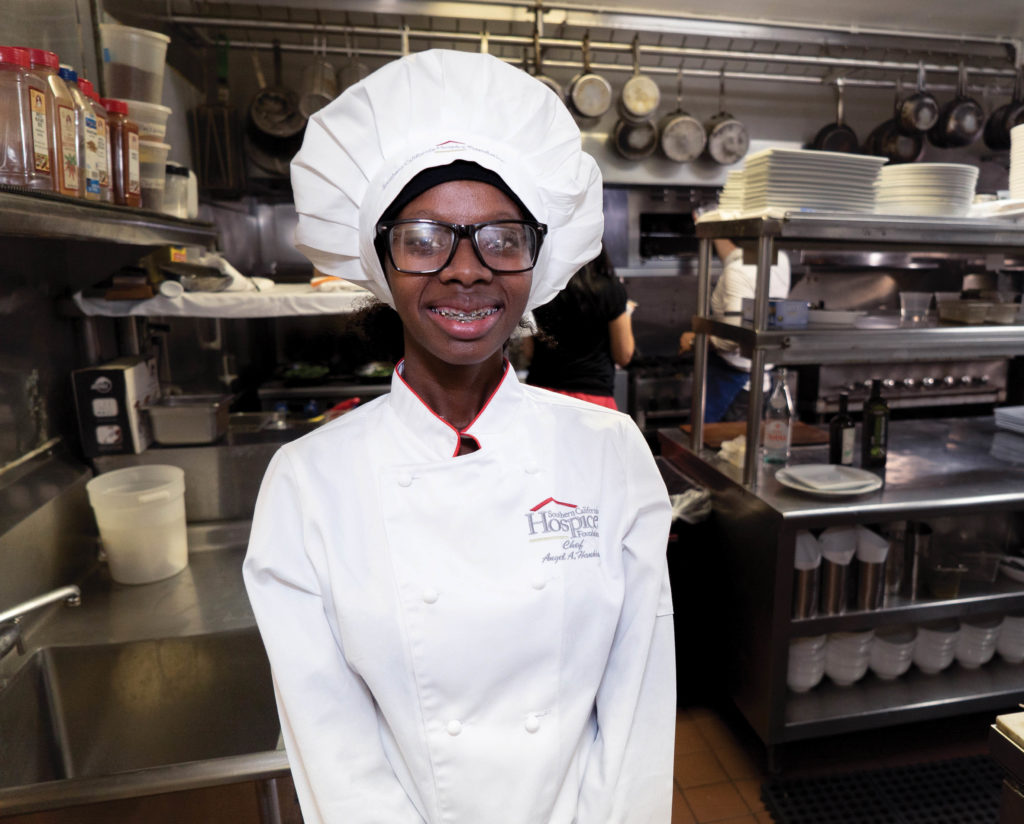 Angel Hankins at Bistro 45 in Pasadena.

While in high school, Angel had a dear friend that had grown up in foster care. “She was both emotionally and nutritionally challenged,” notes Angel, “and I wanted to help. She often talked about food… not getting enough or poor-quality meals. So, I requested that those I would be feeding would be foster girls.”

“In my fifteen years of working to make dreams come true,” adds Wulfestieg, “it was the first time a patient’s wish was to serve others rather than to experience something simply personal… and we set out to make that happen.”

Angel dreamed of cooking a gourmet meal for foster girls and serving it to them in an elegant upscale restaurant. “I just wanted to meet some of the foster girls and to take them out of their day-to-day lives,” she notes, “I wanted to show them it was okay to dream big.”

Foster girls from Pasadena’s Victor Treatment Centers (formerly Rosemary Children’s Services) that serves teenage foster girls who have suffered from traumatic physical and mental abuse came to mind and Wulfestieg knew just who to contact. Donna Pierson, a longtime supporter of local foster organizations and the Founder and Chairman of the Give-Mentor-Love Foundation (formerly the Cottage Guild), knew those to contact and how to get things underway.

One of Angel’s favorite celebrity Chefs is Gordon Ramsay – international restauranteur and host of numerous reality TV programs about competitive cooking and food – also known for his fiery temper, strict demeanor and no-nonsense approach to cooking.

Through both the foundations’ efforts, the publicist who handles Ramsay’s scheduling set up a one-on-one “meet and greet” for Angel at the Beverly Wilshire Hotel. The originally planned meeting began exceeding the allotted time as Ramsay became more and more intrigued with Angel, her desires and her medical situation. As a result, he spent close to an hour chatting, discussing foods and providing cooking tips. He also gave Angel an iPad so she could enroll in his online “Master Chef” program and arranged a lunch for her and the SCHF providers at the Hotel… and, in parting, Ramsay extended an invitation for Angel to come on the set of his “Master Chef” TV show in the Fall – and to even possibly make an appearance.

Angel was beaming. “I was so excited,” she says, “he also gave me an autographed cookbook and wished me well with both my treatments and my culinary journey. I still can’t believe I met him.”

The SCHF crew then whisked Angel off to meet another celebrity Chef, Cat Cora – a famed restauranteur often featured on TV’s “Iron Chef.” Once again, Angel intrigued her idol and was showered with cooking tips, encouragement and a treasured gift of a professional Chef’s cooking knife.

Later that afternoon, Angel was also the Guest of Honor at an SCHF fundraising event in Newport Beach, where she was introduced as an Honorary Chef and detailed each of the five courses as they were being served to the attendees.

Two Chefs In The Kitchen

The foundations also contacted another of Angel’s favorite celebrity Chefs, Wolfgang Puck who introduced them to Chef Hugo Bolanos, the Executive Chef of the famed Hotel Bel-Air in Los Angeles. Again, a simple meeting with a celebrity Chef blossomed into an extended all afternoon event that included making a pizza and cooking a steak together and with Chef Hugo helping her plan the menu for her upcoming cooking debut as a Chef… that was now being scheduled only a few weeks away at the popular upscale Bistro 45 in Pasadena. This too, thanks to owner Robert Smith, was also in the planning stages and fast approaching.

While showering Angel with an array of culinary gifts, Chef Hugo also promised to join her at Bistro 45 and together, they would work as a team in preparing Angel’s dream cuisine for her guests. “Many years earlier my father worked at this restaurant as a server,” Bolanos noted, “and here we are, decades later, and his son… now a professional chef… is back at Bistro 45 helping prepare a lavish luncheon.” It was a moving realization for Chef Hugo and everyone there with Angel that day.

A Gathering Of Angels

On a beautiful Sunday afternoon in mid-October, six foster girls dressed to the nines arrived at Bistro 45 for their luncheon. The girls had the whole place to themselves, and while being seated, were totally in awe of the elegant surroundings of the stylish interior.

Back in the kitchen, wearing a crisp white professional chef’s jacket and hat, Angel worked alongside Chef Hugo preparing the unforgettable special menu they had planned together. “I was so nervous… and excited,” she said. “It was thrilling to see each dish begin to take shape.” 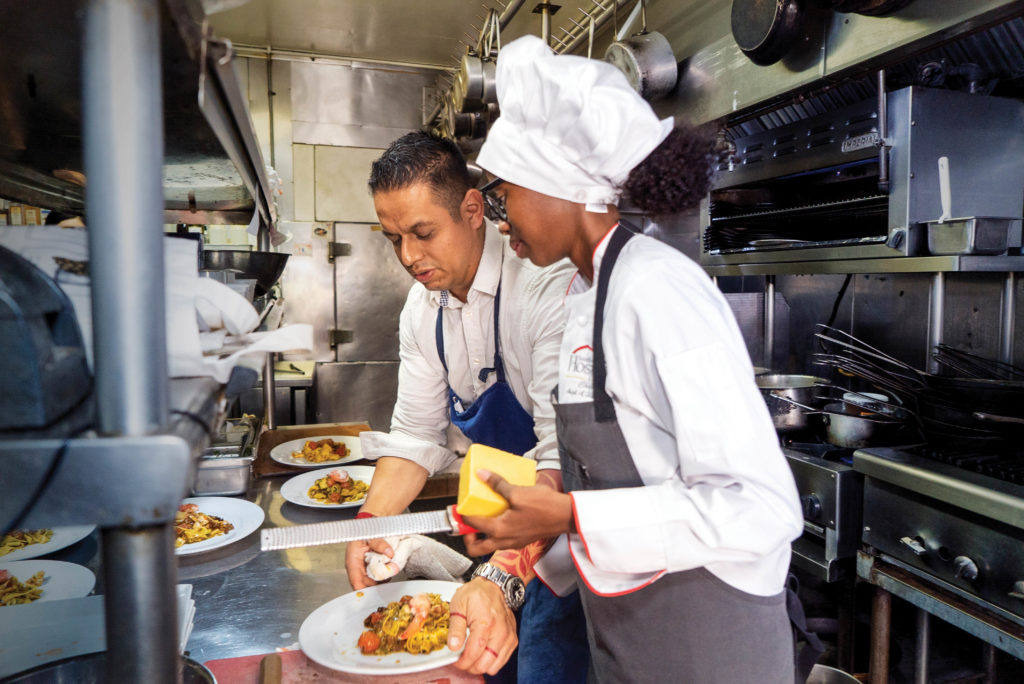 Before the meal, Angel stepped out to greet the girls. She talked about her situation and that she too, like the girls, had suffered abuse and a troubling past as a youth. She also detailed how the chemotherapy was so painful that she simply decided to stop it and to try to keep living life as best she could. “Since then,” she said, “I’ve met so many incredible people… like you girls… and learned it is okay to dream big. So, go ahead… and dream big.”

Then the courses began to be served. Lobster on linguini with pesto, seared lamb with red wine glaze, broccolini and sweet potato puree, and for dessert, a traditional cheesecake with strawberry garnish. While the girls dined in absolute awe, Pierson persuaded Angel to join the group.

“Angel said it was not usual for the Chef to sit with those she is serving, but this was no ordinary day,” comments Pierson, “so I picked up her plate and told her to follow, which she very nervously did.”

When Angel walked into the dining room, the foster girls sprang into action to make space for Angel to sit with them at the table. They wound up sharing much more than a wonderful meal together, it was also an emotional bonding experience where Angel encouraged the girls to always follow their dreams, and was adamant they all continue on to attend college.

After the luncheon, the girls hugged, talked, cried and hugged some more. Pierson, whose foundation is dedicated to mentoring foster girls and helping them forge new life paths for themselves, notes “the six girls were awestruck by Angel.” She continues, “it was absolutely life-changing for these girls… and each walked away a changed person.”

“To see someone as loving and selfless as Angel, doing this with such joy… and with a message of such hope,” Pierson adds, “it was incredibly profound. We all cried so much.”

At the end of the meal, Angel was presented an array of cooking-oriented gifts from the foster girls, the SCHF and the Give-Mentor-Love Foundation… and the foster girls were also each given a personalized gift bag. Angel beamed as she realized that her dream of being a Chef had been fulfilled and her legacy as “one destined to feed others” had truly begun.

“Angel is so unique, so giving and so full of life,” states Wulfestieg. “Not only was her meal delicious and immensely enjoyed, it was an incredibly unique and beautiful life experience for all concerned in so many ways… and there was not a dry eye to be seen.”

From the professional chefs she charmed and who participated, to the gracious owner of Bistro 45, the foundations that took up her cause and all those who helped to fulfill her dream, Wulfestieg concludes, “it was truly a gathering of Angels.”

“The reason I wanted to do this, is while I already know all kinds of pain, I wanted to share that I’m still able to smile… and, no matter what, you can too.”

Angel Hankins has so far accomplished more as a chef in a short period of time – and has worked with more celebrity chefs – than many career chefs will ever do in their lifetime… and she has no interest in slowing down and has no regrets as to her situation. “The reason I wanted to do this,” she says, “is while I already know all kinds of pain, I wanted to share that I’m still able to smile… and, no matter what, you can too.”

Angel’s message and newfound legacy are words to live by. “I hope my story will draw attention to the unseen needs of foster youth,” she adds, “and people will participate in the wonderful programs that are designed to help them better their lives.”

To learn more about helping foster girls of Victor Treatment Centers, or to offer donations to or volunteer with the Give-Mentor-Love Foundation, contact Donna Pierson at (951) 500-9553 or kjunqween@aol.com.