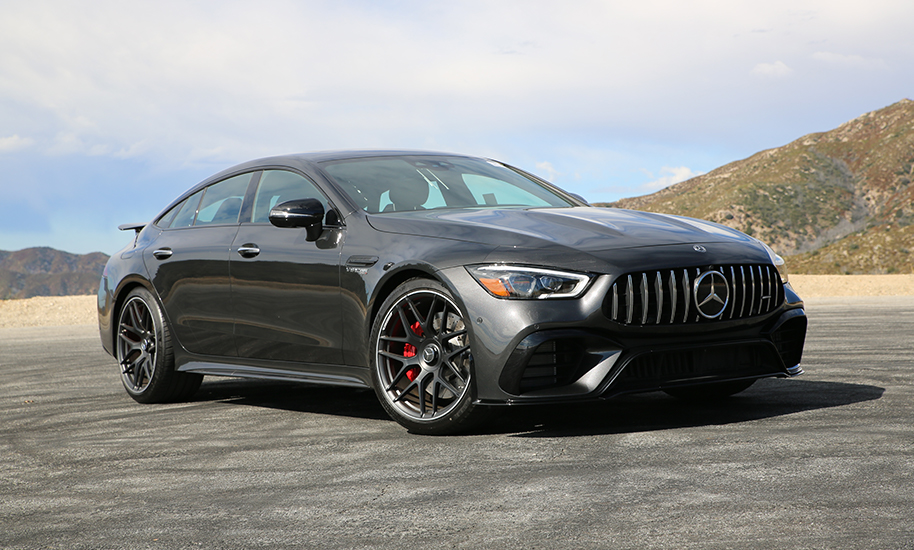 Words And Images By Preeth Kumar

Affalterbach is a quiet village in southwestern Germany, approximately 25 kilometers away from Stuttgart, known for two things – apple orchards and the home of AMG, the branch of Mercedes-Benz responsible for some of the most powerful vehicles in all of Europe.

To many, AMG is a sporty addition to a Mercedes model, but to say that would shortchange the rich history of AMG. In 1967, two Mercedes engineers spent time after work modifying the best motors Mercedes-Benz offered at the time and making them better. They would enter these cars, that seemingly had no business being on the racetrack in some serious racing contests, and would win – convincingly.

Named after engineers, Hans Werner Aufrecht, Erhard Melcher, and Aufrecht’s hometown Großaspach, AMG quickly discovered enormous racing success and became a household name for automotive enthusiasts that wanted the fastest and baddest Mercedes around, but there was a very big stipulation. You couldn’t just walk into a Mercedes store and buy an AMG. Instead, you’d have to buy a Mercedes, ship it to AMG, and pay a steep price to have it converted into an AMG.  Mercedes saw that there was a market for hardcore Benz’, so they decided to get in on the action and incorporated AMG into their dealership structure. By the late 90s, Mercedes purchased a majority of the company, and eventually full ownership of AMG.

It wasn’t until 2010 that AMG built a car from the ground up – the SLS. Shortly after, came the AMG GTS coupe. In more recent times, AMG took the next step and created the AMG GTS 4 door coupé – a ground up AMG car built on the already bulletproof E-class and CLS-class chassis.

To be completely honest, I have very limited seat time with AMGs. I got to drive the AMG GTS coupe during a Porsche 911 launch in 2015, and was immediately impressed. Aesthetically, the GTS looks like nothing else on the road and the interior felt like I was in a spaceship. Dynamically, I loved how direct the steering felt and how the car inspired confidence. And don’t get me started on that motor. What a gem.

Having a wonderful relationship with Ken Lau and Perry Dong of Mercedes-Benz of Arcadia, part of Rusnak Auto Group, yielded a lovely morning with the 2019 AMG GT63, where I would finally have some quality seat time with a proper AMG. Being a resident of Pasadena, CA, there was nowhere else that I’d rather go to than a place that I had never been – the Angeles Crest Highway. 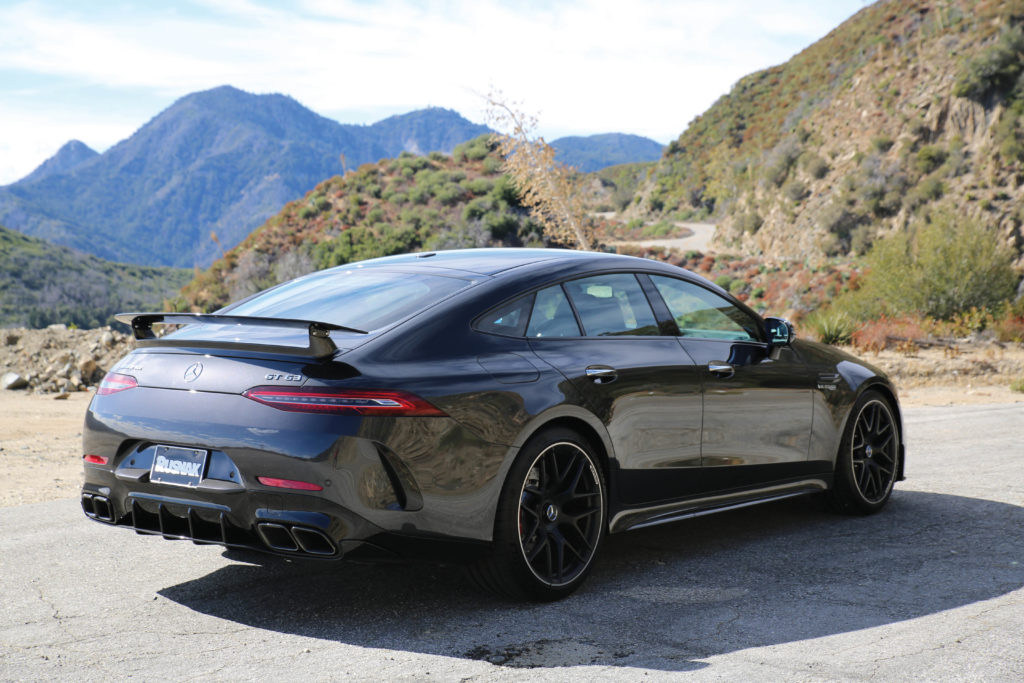 Rear-view of the Mercedes-Benz AMG GT63 in Angeles Crest.

As I approached Mercedes-Benz of Arcadia, nestled in the foothills of the San Gabriel mountains, I was reminded again how beautiful and spacious a Mercedes-Benz facility could be. Peaking at us from the Customer Delivery Center, was our Graphite Grey AMG GT63 sitting on gloss black 21-inch AMG wheels. Upon first glance, it’s hard not to be in awe of this little beast. Its gaping front grille does the impossible, mixing an aggressive, yet subtle design theme. Looking at the car head on, the fenders jut out like sculpted shoulders, giving the car that elusive bulldog stance. I opened the door to the GT63 and was pleasantly greeted by sporty red ambient lighting, a Mercedes-Benz staple. I climbed into the driver’s seat and remarked at how supportive, yet plush, the seats were designed to be. I also enjoyed the seating position, as it made you feel like you were in the car versus “on the car”. I enjoyed the recessed dashboard and elevated center console, offering a cocoon-like cockpit experience. Sitting in the GT63, you feel like you’re at the helm of a command center of a serious machine – exactly how I imagine AMG wants you to feel.

Before we took off, a quick glance at the center console of the AMG revealed some prominent buttons that would allow me to configure how I wanted the car to feel. Thanks to the adaptive suspension, I kept the car in Comfort mode until I got to the twisty bits. I changed the overall dynamic mode of the car into sport – as I wanted a more sensitive throttle, slightly aggressive gear shifts through the 9 speed, yes 9 speed, Mercedes automatic transmission, and a louder exhaust note through the optional Sports Exhaust system was mandatory. Being able to have individual controls over the transmission, throttle, and suspension is necessary in a sports car and honestly, expected, especially from a performance-oriented branch like AMG.

Getting onto the freeway was thrilling, as the monstrous 4.0L bi-turbo V8 pins you back into your seats, while the burbling sports exhaust roars as you romp on the throttle. As the AMG ate up the sweeping freeway onramp, my seats starting hugging me! For a second, I thought the car was possessed, but I didn’t realize that the car was equipped with adaptive bolsters. When you turn left, physics naturally moves your body to the right. To combat that, the right side bolsters squeeze you, giving you the proper support to maintain throttle through a corner and that extra confidence that you need when driving hard.

While on the freeway, the GT63 feels planted and secure, thanks to the adaptive suspension and Mercedes-Benz patented 4Matic All-Wheel-Drive system. With a plethora of seating adjustments, heated and ventilated seats, active bolsters, and massage options, this car would be ideal transport for a cross country trip. The expansive digital gauge cluster and infotainment screen emit the appropriate amount of light to not add stress to your eyes, but offers all of the GT63’s telemetry, while also displaying your pertinent entertainment choices. 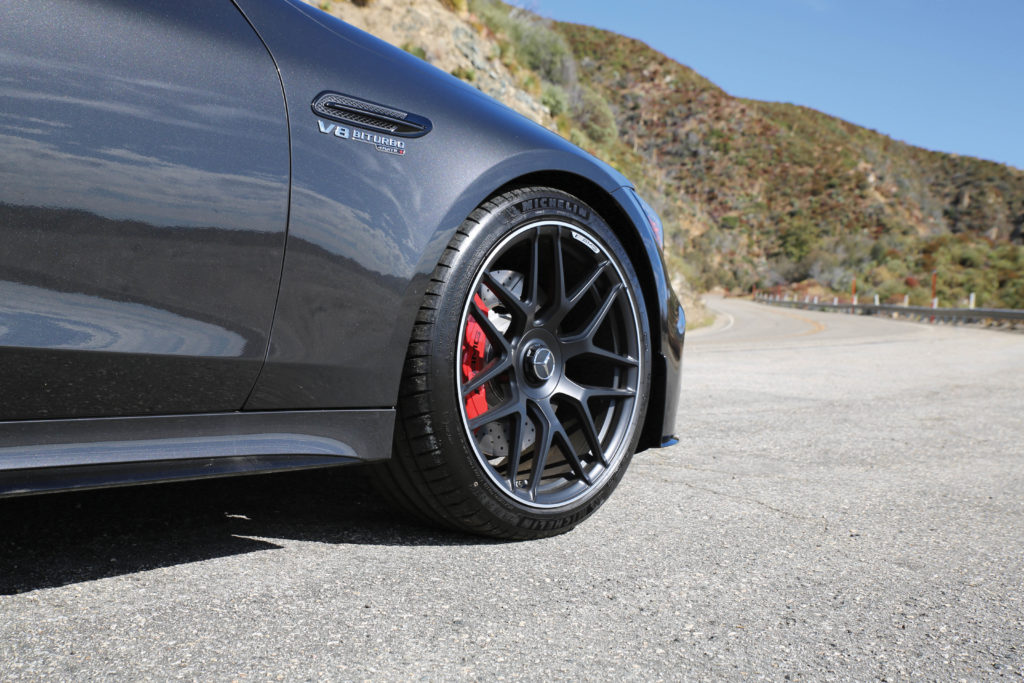 Approaching Angeles Crest reminded me of the feeling I had growing up and taking my bicycle to the steepest hill in my neighborhood. You see the beautiful San Gabriel Mountain Range rising above you and there happens to be a road that seemingly disappears into the base of the mountain. You know that you’re about to go for a ride, but you really don’t know what to expect. As you ascend the mountain, you’re on a two-lane road – one going up and the other going down. The AMG immediately feels at home. Carving up the mountain, I gained more and more confidence, allowing each new corner to be entered at a higher speed. The combination of Michelin Pilot Sport 4 tires, AMG tuned suspension and chassis, and 4Matic system – allowed the GT63 do things it shouldn’t be able to do. Having quick transitions of left, right, left turns, which already require fast hand steering inputs, remarkably there was minimal sway and the car remained composed. Honestly, with a car this size, you’d expect to have your hands full when driving hard, but not with something from AMG.

It has to be noted that AMG performed a miracle with the turbocharging system in this car. It is phenomenal. There’s little to no turbo lag and acceleration was immediate and at hand. The GT63 had plenty of power whenever you needed it. You really shouldn’t be able to take a corner that fast in a car of this size, but you can. There was no drama mid-corner and exiting a corner felt predictable and composed thanks to the AMG tuned chassis.

Through tighter and technical portions of the Crest, the GT63 takes on the persona of a smaller sports car. I was able to tackle transitions easily with barely any understeer what-so-ever. For a traditional automatic transmission, downshifts were zippy, responsive, and retained the car’s composure; while up-shifts allowed for some serious acceleration and little lag. 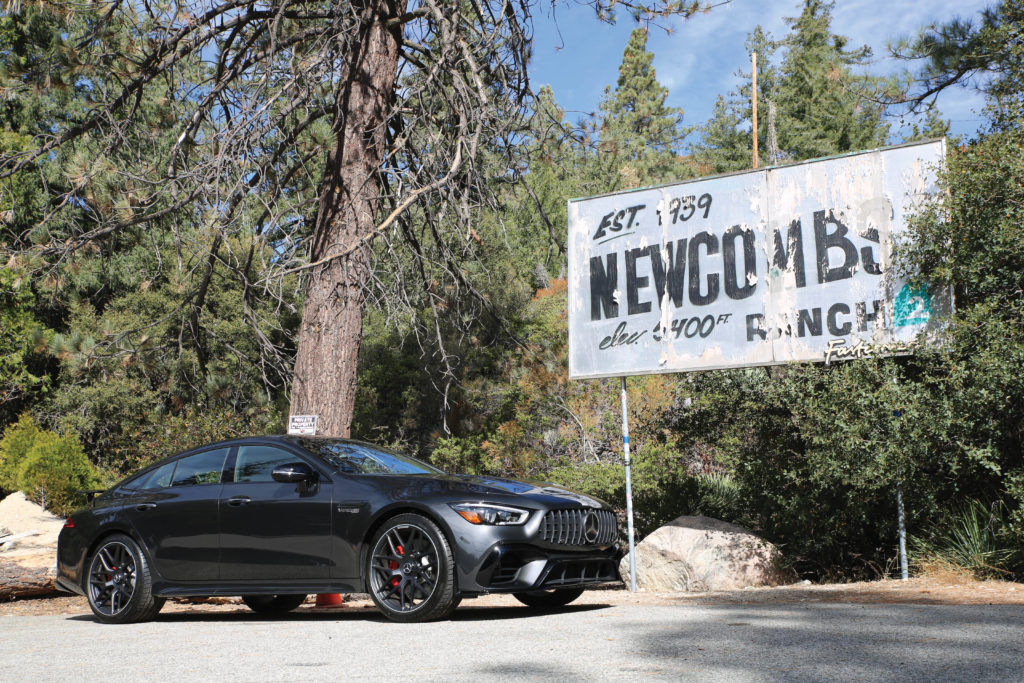 Once we finally parked and got out of the AMG at Newcomb’s Ranch, I looked at the muscular AMG GT63 and had to smile. Engineering has come to a point of defying physics. I was blown away at how a car this size, could do so much. It could take us through town in comfort. It could make a mundane task like entering a freeway exciting. It drew envious eyes like an exotic car on Rodeo Drive. It tackled technical portions of the Angeles Crest with ease making driving a “family sedan” engaging and rewarding. It can out pace supercars with ease. And does all this while still being able to seat 4 comfortably. The GT63 AMG makes everything look easy.

AMG has delivered on the promise and its ethos that it proclaimed 52 years ago – to take the best of Mercedes and make it better.