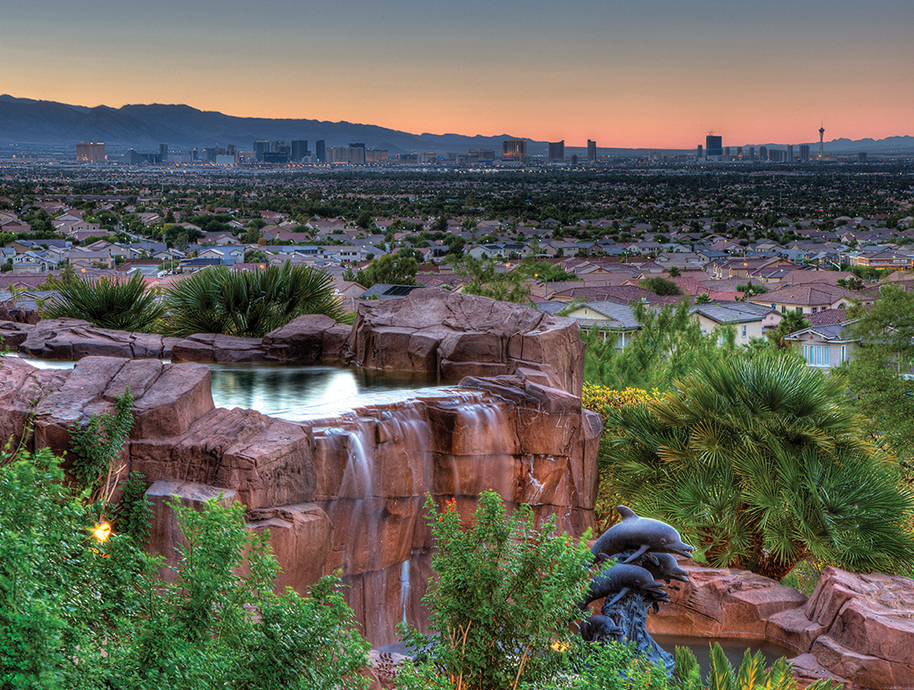 Not Looking Back or Second Guessing the Decision, Stephanie and Gene Raper Make the Transition

By Steve Tobia and Don Logay 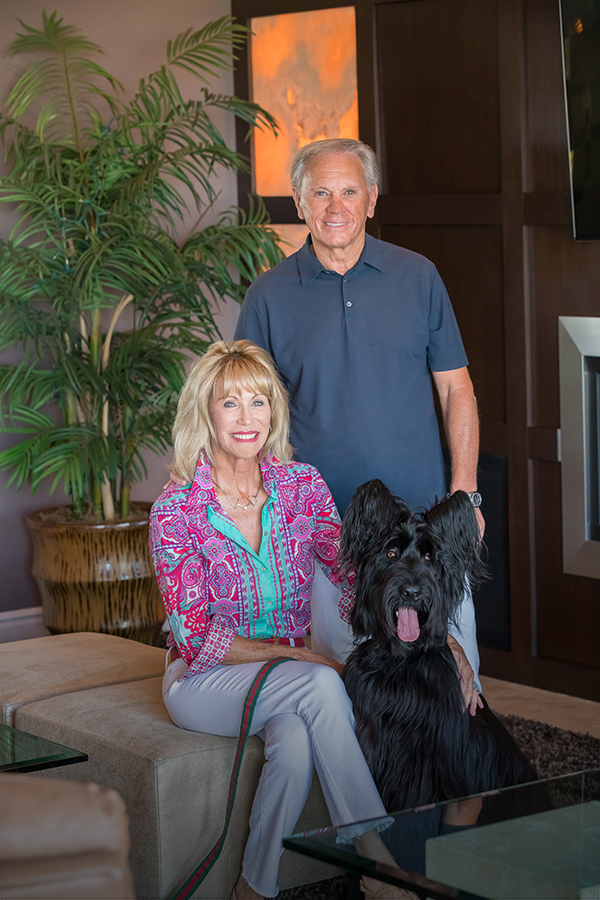 Gene and Stephanie Raper were life-long California residents and successful entrepreneurs with two primary luxury residences. Their main home was in Northern California in Sacramento and the other located in Palm Desert in Southern California.

Like many other Californians, the Rapers began reassessing their previously comfortable and idyllic lifestyle. “Along with mounting taxation came other negatives too,” observed Gene, “such as an increasing population approaching 40 million people, resulting in crowded freeways and a rapidly diminishing lifestyle overall.”

Frequent visitors to Las Vegas for entertainment and shopping, the avid golfers were also introduced to many of the exclusive golf resorts of Las Vegas. Yet, Stephanie was not convinced that leaving their California lifestyle full-time was the right decision. Then it happened.

In November 2012, a ballot initiative passed that raised the maximum personal income tax from 10% to 13.5%.

The new increased personal taxes also increased the cost of businesses and those providing various services. “From the gardener to the pool man to the cleaners, everything would be going up as well,” Gene noted.

As avid golfers, a large part of their decisions as to where to live and where to vacation was based on golf clubs and the members of the club, along with easy aviation.

Gene had visited Nevada numerous times to play golf with friends at the beautiful Jack Nicklaus designed courses at Lake Las Vegas – a luxury enclave nestled around a picturesque man-made 320-acre lake just outside of Las Vegas proper. “I always liked that area,” he notes. “It was beautiful, upscale and people who lived there had nothing but good things to say about it.”

Stephanie also began joining Gene on the trips to Las Vegas. She observed, “Once I started visiting here more and started really thinking about it… we were going to all of these great restaurants and incredible entertainment venues, and then, Las Vegas is supported by a world-class international airport too that provides access to virtually anywhere… which was another factor that impressed me.”

Before long, Gene broached the idea of possibly moving to Las Vegas, to which Stephanie at first replied, “I’m not leaving California.” But then, on that fateful day in November 2012 with the news of a huge tax increase, she put down the paper and said to Gene, “I think it’s time that we go and give Las Vegas a serious look.”

WHO, WHAT, WHEN AND WHERE

“It was December 2012, and only 30-days after the unsettling tax news,” recalls Stephanie. “Cheryl Davis picked us up at Henderson Executive Airport and it was day one of a wonderful new life and the beginning of a beautiful new friendship.”

“As the consummate professional with a high degree of real estate knowledge and skill in every respect, Cheryl knows Las Vegas inside and out. She has an innate ability to develop instant and lasting friendships based on trust,” comments Stephanie.

Cheryl Davis listened to what the Rapers wanted not only in a home but in the social golf environment that would be a match. She began the lifestyle tour of options at Lake Las Vegas, MacDonald Highlands, Summerlin and Southern Highlands.

Entering Macdonald Highlands, one of the top luxury developments in Southern Nevada, the Rapers felt instantly at home. With striking contemporary custom homes overlooking a stunning view of the glittering lights of the Las Vegas Strip off in the distance, they knew immediately that “This intimate and private setting in one of the most sought-after addresses in the Las Vegas Valley would be our new home,” thought Stephanie.

“A spectacular 7,000-plus square foot tri-level residence, with the private Dragon Ridge Country Club nearby, was exactly the lifestyle they were looking for,” states Cheryl Davis.

“We quickly made new friends and enjoyed the total newness of everything around us,” states Gene. “And the airport is only 12-minutes away,” adds Stephanie.

“As the consummate professional with a high degree of real estate knowledge and skill in every respect, Cheryl knows Las Vegas inside and out. She has an innate ability to develop instant and lasting friendships based on trust”

The migration from California is steadily increasing,” notes Cheryl Davis, “While California is pushing people out, Las Vegas continues to draw them in with new hotels, new professional sports teams, a new stadium and a bigger convention center, just to name a few… and with that comes more jobs, more businesses and a booming economy. Plus, California buyers oftentimes get two or three times the square feet in their luxury home as compared to California prices per square foot.”

“When we told our longtime California friends, neighbors and business associates we were moving to Las Vegas, reactions ranged from ‘What?’ and ‘Huh?’ to ‘Really?!’,” Gene says with a smile. 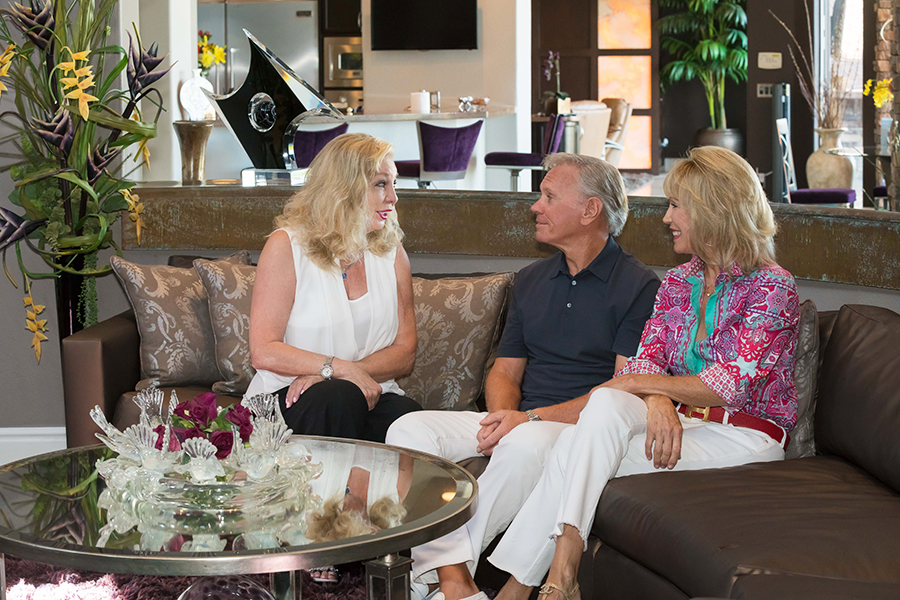 Cheryl Davis (left) discusses the move from California to Las Vegas with Gene and Stephanie Raper.

“And ever since, it seems almost everyone we’ve ever known has either visited Las Vegas or will be visiting at some point soon,” notes Stephanie. “And that includes our kids,” adds Gene. “We have two grown children and they had little desire to visit either Sacramento or Palm Desert. But mention Las Vegas, and their eyes light up and we’re now seeing them more than ever before.”

“When people come to visit, they inevitably start asking questions – and we know what they’re thinking,” say Stephanie and Gene, “and we just give them one name, Cheryl Davis.”

Cheryl Davis is the Owner/Broker of Paragon Premier Properties in Las Vegas, NV. She is nationally recognized for her dominance in the high-end, luxury real estate market. Her thoughts on the market and highlights of her unique business approach have been published in a national best seller, and she continues to be a top producer in the Las Vegas luxury market. You can contact Cheryl at (702) 683-7785 or Cheryl@cdavegas.com.